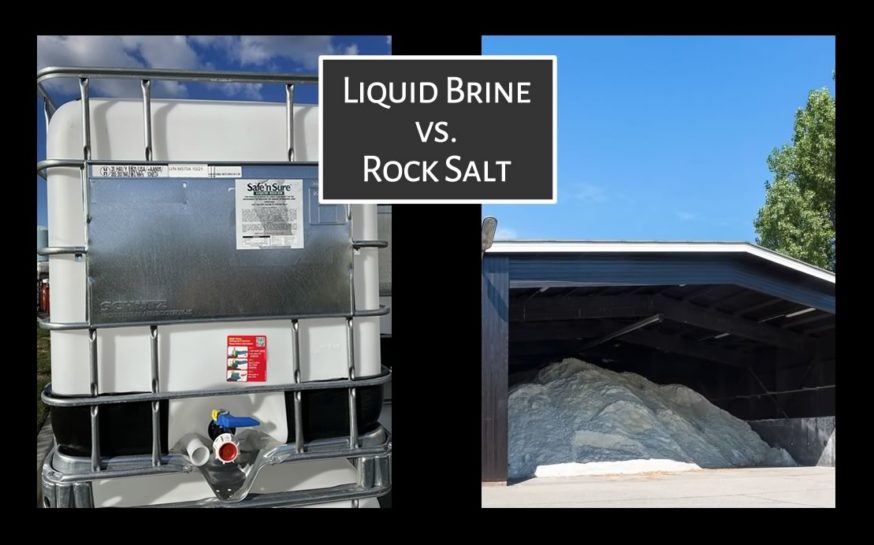 If you are looking to beat the storms this winter and return your roads to drivable conditions faster, you need professional liquid road brine treatments from Rasevic Companies. One treatment of liquid brine will effectively prevent ice build-up and make your entire storm cleanup process faster. Read more to learn about anti-icing liquid brine treatments and how they can save you time and money this snow season.

What is Liquid Road Brine?

Liquid brine is an anti-icing treatment that is applied to the pavement before a winter storm. This solution is typically made up of sodium chloride water, but it can also contain Magnesium Chloride or Calcium Chloride. Liquid brine has a freezing point that is lower than water, allowing it to adhere to the road surface and prevent snow and ice from freezing and accumulating. Liquid brine treatments are applied by large tank trucks that use a pump to spray the liquid product on the road surface. There are two types of treatments that can be applied to minimize ice during a storm. Liquid brine application is an anti-icing treatment because it is applied before a storm hits. There is also a de-icing treatment that can be applied after a storm. De-icing is the process of breaking the bond of ice that has formed and melting it to allow for safe road travel. De-icing typically involves a solid form of rock salt that is spread over the road surface to essentially melt ice and snow. While this treatment is also effective, it requires a larger volume of product than liquid brine anti-icing. In this way, de-icing will usually take longer to melt ice and be more expensive to the larger quantity of product required to achieve effectiveness.

Applying liquid brine to a road surface before a storm is the most effective way to prevent ice build-up, however solid rock salt can also be utilized in place of liquid brine. With this being said, there are some clear advantages to using a liquid brine instead of a salt. Liquid brine penetrates the surface of a road, allowing the product to adhere in place and remain effective even in high wind conditions or on roads with heavy traffic. Rock salt is easily pushed aside as vehicles drive over a road, making this product less effective and not as long-lasting. Additionally, if an anti-icing liquid brine treatment is applied to a road and then a storm doesn’t end up hitting, that treatment will remain effective until the next storm comes (as long as the road does not receive heavy rainfall). In this way liquid brine treatments also allow you to save money and time, as less product is needed and the treatment remains effective for longer periods of time.

Can You Drive on Treated Roads?

A liquid brine treatment occurs before a storm has even begun. You will see trucks with large tanks spraying roads with a liquid chemical to form a protective coating on the pavement. If you do not see the trucks in action, you likely may not be able to tell pavement has even been treated, as liquid brine adheres to the road surface and is not very visible. It is still safe to drive over a road that has been treated, as long as a snowstorm has not started, in which case you should consult local weather travel advisories. If your roads have never received a liquid brine pretreatment, you may be used to seeing large accumulations of rock salt on the pavement after a storm. This rock salt is helpful in keeping road conditions safe and not slippery, and more rock salt typically indicates more treatments have occurred and a road may be safer. This is not the case with a liquid brine pretreatment, so do not worry if you are unable to see the product on the road, it is doing its job and preparing the pavement for a storm.

How Much do Treatments Cost?

The initial cost of a liquid brine anti-icing treatment is typically higher than say the cost of applying rock salt, however, the high initial cost is quickly offset by the effectiveness of the treatment and the time and money that is saved in the end. Applying a liquid brine pretreatment before a storm allows the chemical product to adhere to the pavement surface and block ice and snow from sticking to the surface and accumulating. This makes the process of snow plowing and anti-icing much faster, as snow can be cleared without much effort.

How is Liquid Road Brine Applied?

Liquid brine anti-icing treatments require professional application by a snow plowing and ice management company, as there is only a dedicated window before a storm that liquid brine can be applied in order to be effective and not waste time and money. Professionals understand the performance window of an anti-icing treatment and can choose the best product for a location-based on temperature and concentration. Additionally, a product’s concentration will be altered as it adheres to a pavement surface, which is why it is important to consult a professional company that understands how to look at pavement temperature and weather conditions to choose the most effective anti-icing treatment to save you time and money and get your roads back to safe driving conditions after a storm.

If you are looking to hire a professional snow removal company to apply a liquid brine anti-icing treatment, make sure you contact the company well in advance before a storm, as there is only a short window of time that this treatment will be effective. Liquid brine can save you lots of time and money and bring your roads back to safe driveable conditions faster, but only if you set up a contract with a professional company soon. Contact Rasevic Companies today to schedule your liquid brine pretreatment before the next big storm and keep your roadways protected from ice!